Laurel South is a camp for the four-week camper. We offer excellent facilities and equipment including 2,000 feet of shoreline, top instruction, individualized guided-choice programming and a family-oriented philosophy and atmosphere where lifelong friendships are made.

Build independence and self-esteem with counselors who really care. Kingsley Pines - it is the way camp should be! (Ages 8-16, Coed, 2 & 3 Week Sessions) 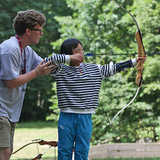 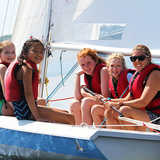 Med-O-Lark Camp is a coed summer program with 300 campers from across the world. Our program focuses on many genres of dance, theater arts, over 15 crafts courses, culinary arts, varied levels of tennis, circus arts, fine arts, waterskiing, and equestrian arts.

A caring and accepting community with Quaker values, creative activities and zany fun!

O-AT-KA, is a traditional boys’ camp located on Sebago Lake offers superb land and water-sports, a strong arts program and a variety wilderness trips including sea-kayaking/canoeing, and hiking. Traditional values, are reinforced by a superb staff, through group living and daily camp gatherings...all helping to build a solid foundation for life which stresses values, skills, friendships, and fun.

Camp All-Star is a coed overnight sports camp located on on the 600 acre campus of the Kents Hill School in Kents Hill, Maine. Campers experience an exciting summer with over 25 sports and activities. We offer 2, 3, 4, or 6 week sessions. The campus provides a safe, fun, nurturing environment with many amenities, including the impressive 4 acre turf fields and $8 million, 50,000 square foot, Alfond Athletics Center.

Our 4 week program provides a customized curriculum for each camper based on their individual level of skill and aptitude for the game. We only hire the top golf school PGA Instructors and USPTA Tennis instructors giving our campers the latest and most sophisticated training available.

The Girl Scouts of Maine offers two resident camps in Southern, and Northern Maine. Camps are open to Girl Scouts and non-Girl Scouts.

Each summer hundreds of talented high school students arrive in Rockport from across the country and around the world to work with professional faculty in the fields of photography, filmmaking, and multimedia.

Experience Maine, theater training and performance, and a lifelong community of friends and fellow artists.

Traditional, values-oriented camp program at a site combining mature forest and open spaces on the shores of beautiful Crescent Lake in Southern Maine.

In a jam packed 3 week session, campers will “major” in the sport of their choice at our state-of-the-art facility, while experiencing everything a traditional camp has to offer.

The curtain is going up... on a summer filled with the excitement and magic of theater camp! Full and half day options for kids ages 5-18, instruction by professional actors and educators.


Search By City In Maine

General Notes About Camps in the State of Maine

The largest cluster of summer camps in Maine resides in the southwestern portion of the state; which houses many inland lakes and forested terrain, providing an excellent setting for residential sleepaway camps. The largest cities in the state are Portland, Lewiston, Bangor, and Auburn ... all of which will reflect a relatively significant number of day camps.

The climate is generally very accommodating for youth camps with generally warm summers which are also humid, and have relatively fewer storms than most locations out east.

The Pine Tree State not only has a vast expanse of forests, it also houses Moosehead Lake, the largest lake which resides entirely in New England as well as Mount Katahdin - which is at the northern most point on the Appalachian Trail - providing an excellent venue for backpacking or wilderness camps to engage in various trips and adventures. Similarly, Arcadia National Park offers a great destination for exploration and summer camp activities. With close to 230 miles of coastal boundaries, Maine also affords summer programs the ability to engage in marine science summer activities as well as the existence of more focused sea camp.

The vast majority of Maine is comprised of forests and is relatively sparsely populated in terms of density; offering an abundant source of wildlife and natural fauna ... lending itself very well to outdoor summer programs.